The first steps in the regeneration of the Gills Inner Basin to make it a suitable all-weather, all-tides, workboat base got under way in early 2017.

This involved knowing accurately what is there (e.g. water-depths, calibrated to “Newlyn, Cornwall, datum”, as are all heights above sea-level in the UK) and in the harbour’s immediate surroundings at present.

This is being done as part of the computerised modelling exercise, being undertaken for GHL by a small post-doctoral analytical team from the Environmental Research Institute at the University of the Highlands & Islands’ Thurso campus in Caithness.

The team has both the necessary high-tech equipment and familiarity with its use, including access to a flying drone, as well as having GHL director Skipper William Simpson taking them out into the harbour area on the ERI Aurora. She’s the small research boat that has been launched many times from the Gills hard-slipway during their Inner Sound sub-sea investigation-works, with Skipper Simpson at the helm.

The detailed modelling study — and Gills Harbour Ltd is grateful to some financial support from the Greencoat Stroupster Wind-farm Fund — became available in spring 2017.

Once this is completed, electronic models providing several suggested positions for the Basin’s mini-breakwaters will be overlaid on basic electronic drawings. Those will be checked for suitability by expected users from Atlantis RL directors, marine operations managers and work-boat operators.

The best positions will be chosen by GHL from the advice being provided from the above that should together tie in precisely (or near so) with local knowledge of how waves interact with the coast at the head of Gills Bay in varying sea-conditions, during different times in the fortnightly and diurnal 12.5 hour tidal cycles.

A next step will involve preparation of working drawings, checking with any official consents that may be required and obtaining likely costing.

Around this time (to mid- 2017), GHL should seek estimates of likely usage over a 10-year, 25-year period or even longer period covering its anticipated 60+ year anticipated life-span.

Those should come from come from senior marine operations management with actual Inner Sound expertise.

It should be acknowledged that this is most likely to be provided “in a range”, rather than a hard-and-fast figure, as it depends on the rate of tidal-turbine immersions; also, if practical experience demonstrates whether turbine maintenance can be restricted to pre-planned five-yearly intervals, or not.

There is a need for an effective GHL Business Plan that should be drafted to show the way ahead.

This should ideally jointly come from (a) an experienced consultant to the tidal stream electricity industry or similar and (b) an economist/chartered accountant with knowledge of UK and Scottish Government grants support for necessary renewables-related shore-side marine infrastructure.

It can be argued that GHL anticipates that Highlands and Islands Enterprise might pick up the tab for this. Any such individual(s) should also be expected to help GHL fill in any complex application forms, being familiar with the “language” required, etc.

There would also be outside private and public sources such as the Crown Estate’s Coastal Communities Fund, the UK Government’s “City and Region” deal for Highland, and the Scottish Government’s Rural Areas support mechanisms, etc. These require to be investigated in some detail in a Gills Harbour Inner Basin regeneration context.

Scottish Hydro Electric (SSE) might have monies to be used for public good in rural areas, while there is a significant-scale “kitty” supplied by the Nuclear Decommissioning Authority to help counter-act the run-down of staff-numbers at the one-time Dounreay nuclear generating site, still the largest work-place in Caithness.

And, of course, there are funds controlled by the National Lottery that could be applicable. This is before any more “exotic” funding methods are investigated by GHL — e.g. by selling naming rights to the Inner Basin, or issuing bonds.

When the then Dounreay former nuclear establishment director Roger Hardy came to visit three years ago, he thought that he might have a unique link with Gills Harbour in the form of the recycled 116-metres former WWII floating dry-dock there. In his previous director’s role with Babcock International at HM Royal Naval Dockyard at Devonport (Plymouth), he had sold for scrap what he first thought was the one he was seeing as the breakwater/berth at Gills.

But Andrew Banks informed him that there were three identical ‘sister-ship’ floating docks built during WWII hostilities as Royal Navy emergency warship repair facilities — the Gills former dry-dock, recycled as its ‘breakwater/berth’, was originally from Barrow-in-Furness, Cumbria. 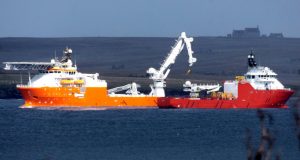 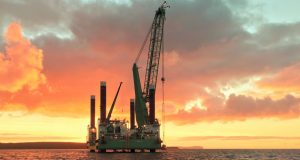 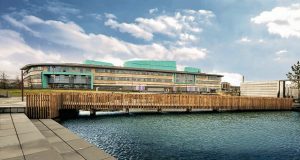